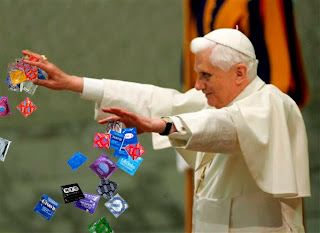 In a landmark ruling yesterday the Vatican announced that an official edict had been passed by his Holiness Pope Benedict the XVI which would now allow priests who abuse and rape young children to use contraception. The decision, first announced during the Popes weekly address to the congregation at St. Peters initially sent shock waves through the crowd but overall was received with a sheepish and muted acceptance.

The decision comes amid recent claims that venereal diseases among priests who abuse and rape young children has almost trebled in Sub Saharan Africa and parts of South America. Turning to Africa, a spokesman for the Vatican, Cardinal Michael O’Rourke explained the reasons behind this shocking rise. “For some inexplicable reason these savages of the Dark Continent harbour the belief that unprotected sexual intercourse resulting in AIDS is a lesser evil than using contraception; a view we wholly endorse, incidentally.” O’Rourke continues: “With so many of the savages population encumbered by this unholy disease it is only natural that a majority of our priests who enjoy, to use the vernacular, ‘riding bareback’ may come into contact with some form of infection.”

The edict aims to tackle this increase in reported STDs among the Catholic Clergy as well as providing the Church with a platform to sound a change in protocol that will herald in a new era of modern thinking.

The move has been welcomed by progressive Catholics who acknowledge this as a sign that the Catholic Church is making steps into a new arena; one which embraces modernity and change. Catholics United in Nurturing Trust (C.U.N.T) spokesthing Ariel Slivera spoke of the bravery of Pope Benedict. “His Holiness has once again shown that he truly understands the nature of Jesus Christ and that he will stop at nothing to bring Catholicism, the one true religion, into the twenty first century.

Critics of the move caution that while condoms, diaphragms and woollen socks have long been known to help curtail the spread of sexually transmitted diseases, the current lack of availability of contraceptives, especially in the Sub Saharan regions of the African continent where they are mostly seen as evil and un-Christian, makes the prospect of the new edict being enacted a long and arduous task. “There would have to be a change of attitude, both social and cultural, on a massive scale for this new ruling to be of any success in many countries in Africa.” highlights Maria Scorzella, Director of the Catholic aid organisation Savage Heart. “The Catholic Church would need to revise their teachings to ensure that the savages would let their children be abused by a priest using contraception, and that there would be no shame or stigma involved.”

Refusing to be drawn into a debate on the ruling, the Supreme Pontiff issued a statement Tuesday. “Hey, look, I don’t make the rules, you know. That’s Gods job. I’m just the messenger, a conduit if you will. You got a problem with it go take it up with him.”. Commenting on Africa in particular the statement read: “As I have said before, The AIDS virus seriously threatens the economic and social stability of the continent...but more than that the virus threatens one of our priests every time a sexy child lays itself open to sexual abuse.”

Some 19 million Africans are currently living with AIDS. The UN estimates that without new initiatives and greater access to drugs, more than 80 million Africans may die from AIDS by 2025 and HIV infections could reach 90 million, or 10% of the continent’s population.

In stark contrast it is hoped that the ranks of paedophile priests reporting venereal
diseases could be reduced to as low as 0.3% by the same date with the new ruling in place. 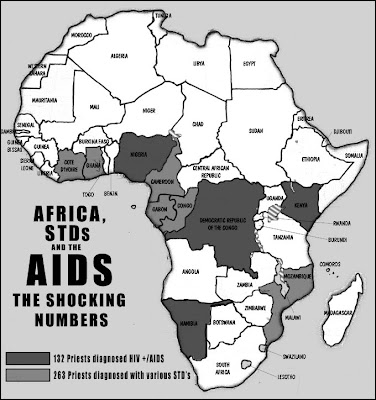 A Brief History
Founded in 1888, in 2010 the online version of The Templar Times was launched. An alternative to the mainstream media, this Left-leaning, Right Wing Conservative Liberal newspaper reports the stories that other media outlets only hint at. Edited by Archimedes Templar & Papa Hotel the news outlet has attracted several prominent guest writers submitting their works pro bono and without credit in order to cash in on the Templar Times creed “The Truth Cannot Be Bought”.